These unusual beeping sounds were heard in different areas of North America from the 1960’s to the 1990’s. They were so predominant in the Pacific Northwest along with ufo sightings, that the US Air Force sent out members of the Condon Committee to find and report on these beeping sounds. On October 7, 1966, the U.S. Air Force commissioned the University of Colorado and physicist Edward Condon to head up a two-year project to study UFOs. This book contains their conclusions after the most extensive investigation to that time. What is laughable, is that their investigators never encountered the sound directly, and took the easy route out, saying a farmer had shot a small six inch SAW WHET OWL and then concluded the owl was to blame for all the reports. Of course, decades later, Dr. Ron Stearman and I set out to disprove their findings, which we did.

Many hours were spent analysing several of the beeping recordings from 1993 to 1997 by Dr. Ronald Stearman and his students at the University of Austin, Texas. We even took Dr. Richard Haines out to the laboratory in 1994 to hear these sounds. Here’s Dr. Ronald Stearman on the left with Dr. James Harder from the MUFON conference that year. 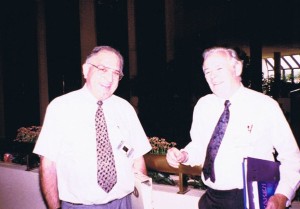 Here’s a color auto power spectrum graph of several the beeping tapes compared to that of the saw whet owl. Following this are time series analysis starting with the saw whet owl and going through different beeping cases. 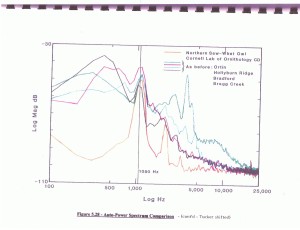 Time series analysis of a saw whet owl, it stops to breathe. 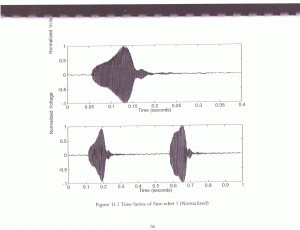 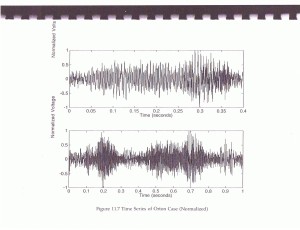 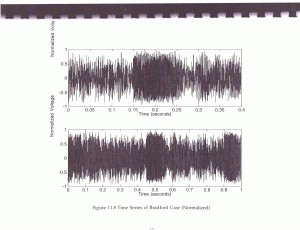 Although I worked with many doctors, scientists, engineers, MUFON Directors, writers and researchers alike; the ones that had the most interesting theories had the most impact on me and I am eternally grateful for their input and contacts. Dr. ANDRIJA PUHARICH, scientist, physicist, parapsychologist and holder of 75 international patents whom I worked with from 1975 until the late 1980’s. Author of The Sacred Mushroom (1959), Beyond Telepathy (1962),  Uri, a Journal into the Mystery of Uri Geller (1974), Arigo: Surgeon with the Rusty Knife (with John. G Fuller 1974), The Iceland Papers (1979) and Time No Longer (1981). Here’s a photo I took of Andrija in his office in Ossining, New York in 1976. 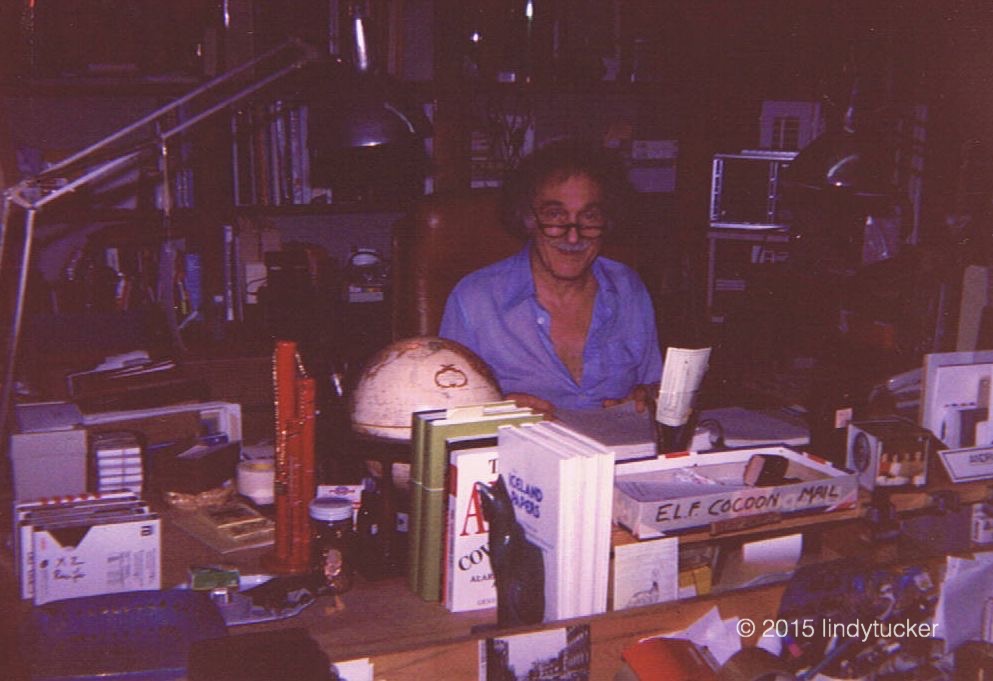 The esteemed psychiatrist and parapsychologist Dr. BERTHOLD SCHWARZ from Vero Beach Florida (who mentored me from 1987 until his passing in 2010), authored many books and had interviewed or studied most of the experiencers, contactees and greatest mediums of the past century. A few of his most notable books were UFO DYNAMICS — Psychiatric and Psychic Aspects of the UFO Syndrome (1988), Psychic Nexus (1980), Into the Crystal (1992),  PSI and the Life Cycle (1974), Parent-Child Telepathy (1971), A Psychiatrist Looks at ESP (1968), The Jacques Romano Story (1968) and Psychic Dynamics (1965). Here’s one of my favorite photos taken in his study. Below is one of his last articles: 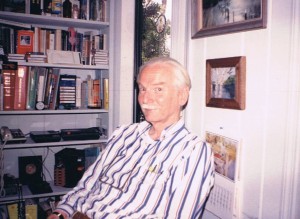 I consider myself very lucky to have had both these maverick doctor/scientists to share in my exploration and to help me find my way through the maze of “ufo research”.  They gave me contacts to follow up with, introduced me to many, many more people just like me and opened many doors to my research. Dr. Schwarz encouraged me to publish, and without his insistence, I doubt I’d be putting this all out there today.

One of my first original articles done in 1994: MUFON JOURNAL 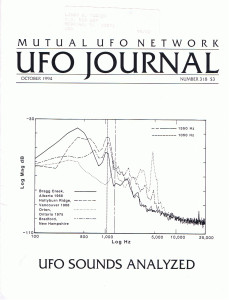 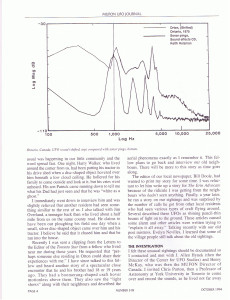 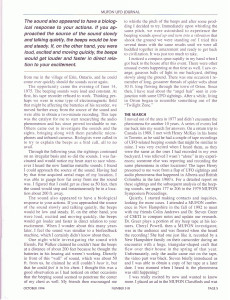 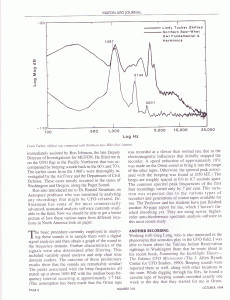 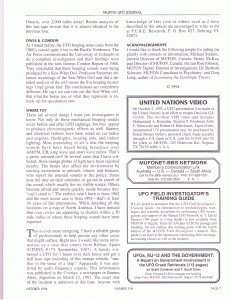 Word was getting around about the similarities I had found with crop circles being in and around the same locations as the beeping sounds and the ufo sightings, so I was asked by the Editor of the UK magazine, George Wingfield of The Cerealogist to write an article for him in 1995: 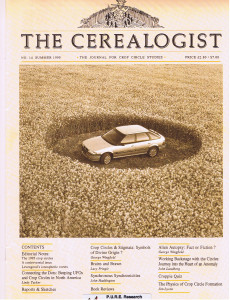 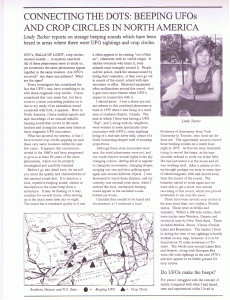 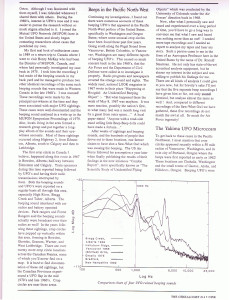 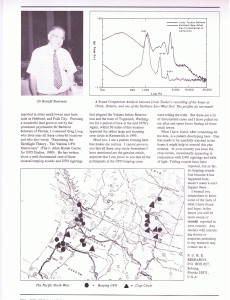 George Wingfield and I at the Seattle MUFON Conference 1994 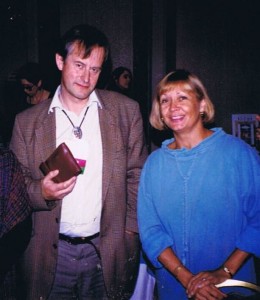 I continued to research privately, preferring to work only with the doctors, engineers and the contacts they led me to. I continued to collect cases and talk to other witnesses but dropped out of the research publicly until just a few years ago. Then I published articles for my old friends, Dr. Steven Greer (CSETI) and the Disclosure Project) and Colin Andrews, the top researcher in his field on crop circles.

Here’s a photo of Dr. Steven Greer and Colin Andrews I took back in 1992 followed by one I took of them in Rio Rico back in 2009. 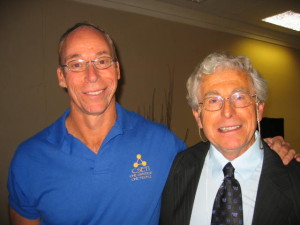 My CSETI article is basically the same in different format.

I am working to archive the dozens of  ufo beeping cases that I have collected over the past three decades, which need to be scanned and uploaded. Some are from old newspaper clippings, ufo reports and/or full investigations from investigators and authors. Thank you for your interest in my research. (statement will be ‘natural creations’)